Music has always been doing something to me. Even as a child, I sat for hours at the piano in the public library and pressed the keys, fascinated by the richness of the sounds that resulted from it. Then came the school times, adolescence, and the first acoustic guitar (or rather a guitar-like product), bought with hardly pocket money after many months of hunting for delivery in a music store (yes, the turn of the seventies and eighties was the time when goods in Poland were not waiting in shop for buyer …).

It was also the time of many hours of trying the basic chords and techniques of playing an instrument, that hurt my fingers painfully and made a terrible humming noise (thanks, Mom and Dad, for surviving it!). It was that time I have discovered the variety of sounds that can come from a guitar, and I have loved the vibrance of a guitar box held to my heart.

’The Wall’ and 'Oxygene’ appeared to the world, and the souls of teenagers were ruled by The Doors, Led Zeppelin, AC/DC, and, in Poland the trends were set by the Jarocin festival. There were also ZZ Top, Santana, U2, Dead Can Dance, Sex Pistols, Joy Division, but also Mike Oldfield, Leonard Cohen, Cocteau Twins, Massive Attack and lots of other music that stimulated my imagination. I was shaped by various types of rock, but also nascent synthesizer music, progressive, psychedelic, blues, a bit of jazz, but also classic and ethnic music.

Then the student times came, and it turned out that when I play, there are the people who want to listen to it. It was a time when I got immersed into the world of student-songs, poetry-songs and everything other that could be done solo with the guitar. It was then that 'Obcęgówa’ was created and the first experiences on the stage appeared. It was then that I got a taste of composing music to others lyrics, although, I was always more attracted to painting musical pictures than speaking with the words.

Then the time came when the music receded into the background, I played a little and did not create anything. Although, the longing to play, alone or in company, was always strongly present. And then the era of computers and the Internet came. Finally, I acquired an electric guitar and connected it to my computer. It turned out that thanks to the DAW I don’t have to look for a company to play, but I can play with myself, in a duet, band or even orchestra, and I have all the tools for painting musical pictures just on my desk.

That was around 2012. It was then that the first sounds for Cloudtouching, Eveninglide or Troubless were created, which I developed over the time by adding shapes and colors. I have learnt the basics of music production, and the results obtained pushed me to experiments with various instruments and sounds, but also to develop the skills of the instrumentalist and composer.

Over time, the material grown, and it appeared that the songs that were created are a reflection of various impressions related to flying, combined with the results of chasing different musical ideas. So I decided to collect them under a common name: Cloudtouching / Chmurdotykanie. The project is evolving and slowly growing and growing.

What is driving me? Both: flying and creating music gives the fun of freely going where I want to, and how I want. Is it … the freedom? 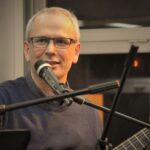